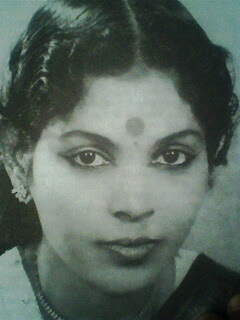 K. JAMUNA Rani, a popular cine-playback artiste from India will grace this year's Sarasaviya Festival as a special guest.

She has sung over 6,000 songs in various languages including Tamil, Telugu, Kannada, Malayalam and Sinhalese.

Rani's initial acquaintance with the film industry was at the age of seven, when she sang her first song in a Telugu movie Thyagaya in 1945.

She noted that it was picturised on a child artiste. The first time she gave playback to a heroine was in a Tamil film Valayapathy (1952) of modern theatres. The popular song Asayum, En Nesamum...' in the Tamil film Gulebakaavali (1955) became a great hit.

"My first opportunity to sing a Sinhalese song was for the movie Sujatha (1953) which was produced by Sri. Gunarathnam of Sri Lanka and Sri T. R. Sundaram of Modern Theatres, Salem. Subseqently, I sang many Sinhala songs, which were hit numbers for movies including Sadasulaang, Vanamohini, Suraya, Maathalang, Varadha Kageda, she noted.

Her life-time achievements have been, receiving the honour from the State Government of Tamil nadu with the 'Kalaimaamani' award in 1998, and the 'Aringnar Annadurai' award for 2002.

Born on May 17th , 1938, as the daughter of K. Varadarajulu, an officer in a private company, and K. Droupathy, herself a violinist, Jamuna Rani recalls being interested in music from early childhood.

Nostalgia for the older generation, fascination for the younger. Jamuna Rani, She remembers vividly how she sang her first song for the Telugu movie called Thyagayya at the age of seven. By the time she was thirteen she was doing background singing for heroines of movies like "Valayapathy", and had become a popular vocalist before she turned eighteen with hits like 'Asauym Ennesamum... in the Tamil film "Gulebakaavali".

Having sung over 6000 songs till now in various languages including Tamil, Telugu, Kannada and Malayalam, she says she sang her first Sinhala song for the movie 'Sujatha" in 1953. Produced by Sri Gunaratnam and T.R Sundaram the songs in the movie, i.e Premalokaya nivee giyaa and Prema gange became top hits among the Sri Lankan cinema lovers. Among the other movies for which she did background singing are 'Sada Sulang", Vana Mohini, Suraya, Mathalang and Varada Kaageda.

Confessing "Ayubowan" is the only Sinhala word she knows, Jamuna Rani says she writes the words she sings in Telugu, her mother tongue.

She is grateful to Ananda Samarakoon for helping her with the Sinhala pronunciation. "He sat beside me and taught me how to pronounce the words in "Pem kekula pipe, word by word. He and Latha Valpola helped me when I started to sing Sinhala songs".

Having traveled all over the world from Singapore to South Africa, from France to Canada to participate in musical shows and cultural programs she says she is happy and feels deeply satisfied with the applause and appreciation she receives from the audience of other countries.

Even though she would like to introduce her Sinhala songs to her fans in India, she says Indian music lovers are used to listening to Tamil, Telugu or Hindi songs and may not understand Sinhala songs. Grateful for her fans in Sri Lanka she reiterated, "Let me tell you this, Indian fans would not have accepted a Sri Lankan playback singer in India the way Sri Lankans have accepted me and the songs I have sung for Sri Lankan movies".

Asked how she feels about the present playback singing in the Sri Lankan Cinema, she said she cannot make a comment as she has not seen a single current movie made in Sri Lanka.