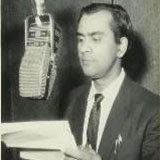 Prativaada Bhayankara Srinivaas (born on sep 22) , shortly PBS, is a truly multifaceted talent to hit the Indian Music world. Though he hails from Andhra, he is very famous in Kannada and Tamil Film Music. He became very popular in Tamil after his beatiful renderings "Vanithaamaniye", "Kannale pesi pesi kollaathe" in the film "Adutha veettu penn". Thereafter he has given many many memorable songs(e.g. "Mayakkamaa kalakkamaa"(Sumai thaangi), "Nilave ennidam nerungaathe"(Raamu), "Chinna chinna kannanukku"(Vaazhkkai padagu), etc.) especially with the Viswanathan-Ramamoorthy and Kannadhaasan combination. He had the expressiveness and the ability to invest songs with delicate emotions that mesmerized anyone right in the first listening itself. In spite of this, he couldn't establish a strong base as he could in Kannada, with TMS taking over in Tamil and SPB in Telugu. (This is sometimes compared with Kishore kumar's "dethroning" of ) he is most well known for his melodious playback singing in the Kannada film industry for Dr.Rajkumar.

P.B. Sreenivos is fluent in eight languages (including English and Urdu) and has penned several ghazals in Tamil. His "home away from home" is the Woodlands Drive-In restaurant in Chennai where one can find him almost any day writing.

A true polyglot he is (writes and speaks more than 10 Indian languages) with flawless diction in most of the languages, has had success outside his native state Andhra. His popularity in Kannada films during late 50's to mid 70's was so much that he is claimed to be a kannadiga by many. The key to his success was the total identification that arose between his voice and 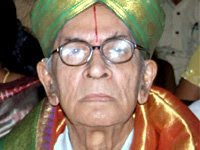 Rajkumar, the dominant male star of the industry. (In Tamil PBS is identified with Gemini.) The range of songs PBS sang paralleled the range of roles done by Rajkumar (mythological, historical, social, fabulous, mystery, espionage, every genre one can come up with). It is said that the process of merging of the singer and the actor was far more complete than in the case of Raj kapoor and Mukesh. PBS is also popular in Hindi thru "Main Bhi Ladki Hun" (remake of "Naamum oru penn") songs like "Chanda Se Hoga Wo Pyara, Phulon Se Hoga Wo Nyaara", a duet with Lata. Chitragupta was the music director.

An often unknown facet of PBS is his literary skills. He comes from a poet's family and is wellknown in Telugu literary circles. He also composes songs in Tamil, Hindi, Sinhalese and Urdu. In fact, his Urdu ghazals have been acclaimed by the NorthIndian Ustads.

Some people claim PBS to be a muslim(probably because he sports the kind of a cap usually favoured Muslims), which is not true.

He was at ease singing in all the south indian languages - but left a great mark on Tamil and Kannada Film music.

In his 80s now - he was honoured at a local club in Bangalore recently - where he spoke very well and sang a few Kannada songs too. 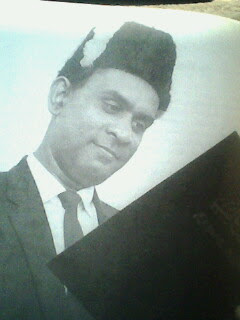 Number of Songs In Different Languages