She started her carrier as child artist and played differant roles.She was a good singer.In early days the songs will sing by artist only.She acted with all top heros in telugu industry.Telugu and Tamil actress and noted singer. Born in Jaggampeta, AP.In 1927. Debut as child actress in K. Subramanyam's Balayogini and Seva Sadan. First adult role in Ramabrahmam's Mayalokam. Top 50s Tamil star with several musical hits. Also considered in some ways a successor to Kannamba, e.g. in Panama Pasama -where she 'tames' her mother-in-law. Turned producer - with Varalakshmi Films (1957). Married A.L. Srinivasan, owner of the ALS Prod. and brother of Kannadasan. 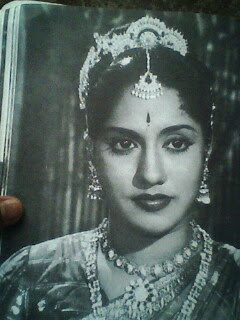 Born in Jaggampeta near Kakinada, S. Varalakshmi is a born singer and showed keen interest in music from her childhood. She made her debut as a child artiste in 'Bala Yogini' followed by 'Seva Sadan' in Tamil. She acted as a child actor in a Hindi movie 'Prem Sagar' too. Gudapati Ramabrahmam offered her the heroine's role in 'Maya Lokam'. She then acted as Maguva Manchala opposite Nageswara Rao in the hero Balachandra's role in 'Palnati Yuddham'. She sang the songs for the movie too. She secured a firm place in films as a singer actor with the success of the film released in 1947. In 'Balaraju' too she teamed with ANR and the film went on to its twenty-fifth week in most theatres. The songs in the movie rang in the ears of people for quite a long time. She starred in a number of Tamil movies too. She sang in a concert on the occasion of the marriage of ANR.

The Tamil version of Balaraju got her as much fame as did Balaraju. She was awarded the state award as the best actress. 'Jeevitham' in which she starred ran on for two hundred days. For her songs in 'Veerapapandya Kattabomman' in which she acted the lead role with Sivaji Ganesan, she received a certificate of appreciation inscribed in gold. Her performances in Kannamba's Raja Rajeswari banner movies Sati Sakkubai, Naga Panchami and Sri Krishna Tulabhaaram brought her great fame. She distinguished herself as a great artiste for her portrayal of the role of Satyabhama in 'Tulabharam'. She introduced to films Balamuralikrishna in her own production 'Sati Savithri'. She selected eight music directors for the movie. She produced the films 'Veera Bhaskarudu' in Telugu and Kannada, and 'Babruvahan' in Telugu. She acted also in Sri Venkateswara Mahatmyam, Krishnaprema and Maha Mantri Timmarasu. 'Sathya Harishchandra' is her last movie as a heroine. She appeared in NTR's Ummadi Kutumbam, Dana Veera Sura Karna and Chanakya Chandragupta. Her last Telugu movie is Krishna's production 'Neti Bharatham'. Her husband was AL Srinivasan, brother of Kannadasan. After his death, she stopped acting.